John Rawls and the Fantasyland of Social Justice

The Sphinx: Franklin Roosevelt, the Isolationists, and the Road to World War II, by Nicholas Wapshott 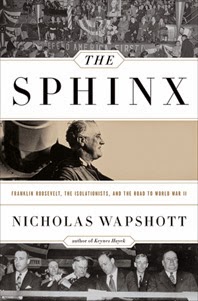 The complicated strategic struggle between President Franklin D. Roosevelt and those who believed the United States could and should stay out of World War II has been repeatedly explored, mostly through works extolling the wisdom and foresight of the president.  The hagiographic interpretations frequently depend on attributing to the president intentions that he may not have had. Since FDR generally operated with maximal ambiguity, these post hoc attributions are easy to make and hard to rebut.  FDR's public assurances that he would not lead the nation into war are generally interpreted as clever stratagems of a prescient leader who understood that the American people needed to be led gently toward an inevitable war, while his private assurances to Churchill that America would come into the conflict are taken as statements of his true vision. Historians rarely consider the possibility that the pragmatic and duplicitous president may have simply been telling all sides what they wanted to hear, while he himself was pulled along by events.

The title of  Nicholas Wapshott's book reflects the problem of understanding Roosevelt. As the 1940 election approached, the organization of White House correspondents, the Gridiron Club, commissioned a papier-mâché sculpture of the president in the form of the Egyptian sphinx because of the mystery about whether he would run for a third-term. Wapshott takes this as emblematic of all of Roosevelt's dealings.

While earlier books, such as Wayne Cole's 1983 Roosevelt and the Isolationists,  have concentrated on FDR's relations with members of Congress, Wapshott shapes much of the book around two non-Congressional  opponents of American intervention:  Joseph Kennedy and Charles Lindbergh. In Wapshott's account, Roosevelt had Kennedy appointed Ambassador to Britain in order to get the Irish American tycoon, who had his own presidential ambitions for 1940, out of the country. Lindbergh, also served the American government, having initially gone to Germany on the request of US officials to judge German military air capacities.  I have some questions about Wapshott's attention to Kennedy, who had little influence on American foreign policy, in spite of his prestigious appointment.  This lack of influence may have been due to Roosevelt's cleverness in sidelining Kennedy, as Wapshott suggests, but it may also have been because Kennedy was never as politically astute as he believed himself to be. By all accounts, Lindbergh was an important figure in the struggle against intervention.  Some of the best parts of the book dealt with this tragic figure, a man duped and used by the Nazis, celebrated and vilified by his own countrymen, and possessing stalwart courage and personal integrity along with tunnel vision and dubious judgment.

The developments described by this book raise some difficult questions.  If Roosevelt did engage in double-dealing in order to prepare the nation for war, what does this mean about democratic leadership? Does good leadership entail misleading people for their own good? Can we trace the imperial presidency that ArthurSchlesinger identified as growing mostly during the Nixon administration back much earlier, to the time of Lend-Lease and Roosevelt's extensions of executive power?
Posted by Carl Bankston at 8:08 AM No comments: